For more information on the health risks of spaying or neutering your puppy or dog, please visit the following website: 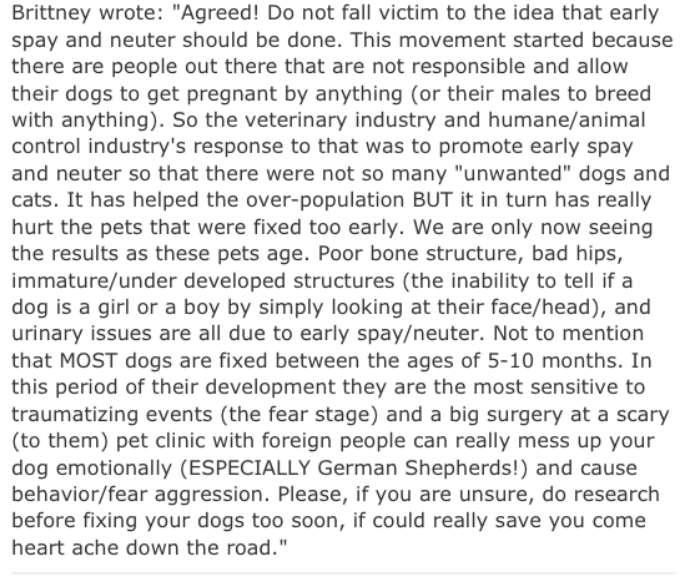 Below is an article published by Purina, we do not own the article, but wanted to share it's useful information.
https://www.purinaproclub.com/resource-library/pro-club-updates/study-finds-early-spay-neuter-surgeries-in-german-shepherd-dogs-increase-risk-of-joint-problems/
​http://veterinarynews.dvm360.com/study-shows-early-neutering-poses-health-risks-german-shepherds
​http://onlinelibrary.wiley.com/doi/10.1002/vms3.34/full
Ruskin House of Shepherds does not own copyrights of this article, but wanted to share with you its useful information, which can be found at the following link.
​http://www.dogsnaturallymagazine.com/new-study-neuter-risk-hip-dysplasia-dogs/

Recent studies have shown that neutering can have an adverse effect on the health of a dog. To further delve into this new information, a team of researchers at UC Davis recently examined the veterinary records of 759 Golden Retrievers for hip dysplasia, cranial cruciate ligament tear, lymphosarcoma, hemangiosarcoma and mast cell tumor. The dogs were grouped as intact, neutered before 12 months of age or neutered after 12 months of age.
The study, which is to be published today, revealed that the disease rates were significantly higher in both males and females that were neutered both before and after 12 months of age. Early neutering was associated with an increased incidence of hip dysplasia, cranial cruciate ligament tear and lymphosarcoma in males and of cranial cruciate ligament tear in females. Neutering after 12 months of age was associated with an increased risk of mast cell tumors and hemangiosarcoma in females.
The most notable results from this study include a doubled risk of hip dysplasia among males neutered before 12 months of age and the increased risk of mast cell tumors and hemangiosarcoma in dogs neutered after 12 months. Previous studies reported only a 17% increase in risk of hip dysplasia in neutered dogs and this is the first study to report an increased risk of cancer in dogs neutered late.
Of the five diseases measured, the study reported that: